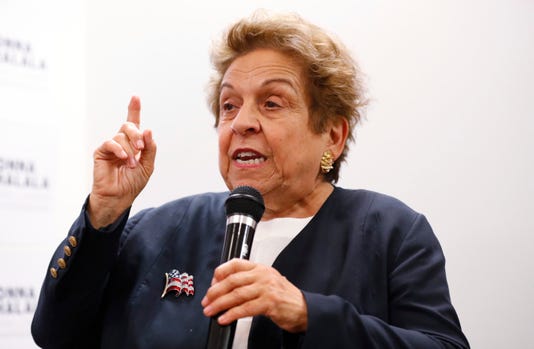 MIAMI – Democrat Donna Shalala, a former Cabinet secretary and University of Wisconsin-Madison chancellor, Tuesday won a U.S. House seat in Florida that had been held by a Republican.

Shalala, the ex-Health and Human Services secretary, was running for elective office for the first time at age 77. She won the 27th District over former television journalist Maria Elvira Salazar. The district was represented for decades by GOP Rep. Ileana Ros-Lehtinen, who is retiring.

Without mentioning President Donald Trump by name, Shalala had a clear message for the White House in her victory speech.

“Mr. President, here we come,” she said to loud cheers. “Bringing us together is absolutely crucial. Some people would like to divide us. We just can’t let that happen, because it’s un-American.”

Shalala was HHS secretary under President Bill Clinton. She was president of the University of Miami from 2001 through 2015 and was UW-Madison chancellor from 1988 to 1993.

We want everyone to have free access to our election coverage Tuesday and Wednesday, but we hope you will consider supporting the Journal Sentinel by subscribing at jsonline.com/deal.

Florida grants felons who have…

Kremlin shrugs at US midterm…

Driver charged in crash that…